Managing conflict is an unavoidable part of almost any career, and the distinctive nature of a health informaticist’s work can make conflicts more frequent and more essential to manage than those in many other fields.

Conflicts in a healthcare setting can range from everyday disagreements to major controversies that can lead to litigation or, in rare cases, even violence. They can arise between physicians, between physicians and staff, and between the staff or the health care team and the patient or patient’s family.

Whatever the nature of the conflicts, they almost invariably have an adverse effect on productivity and patient care. They negatively impact efficiency, and they can lead to miscommunication, poor morale and high staff turnover.

The best way to manage conflict is to prevent it or reduce its frequency and intensity. That means establishing a professional code of conduct, not only in the hospital but also as part of group practice policies and medical staff bylaws. Clearly written, established rules make it easier to discipline by taking personality out of the equation, which is often at the root of conflicts.

The code should include a disciplinary structure so that the mechanisms and the referral pattern to higher authority are understood by everyone involved. Everyone needs to understand that there are firm limits on inappropriate behavior. Often, when such policies have been established, conflicts end up being resolved at lower levels before they involve more staff and distract them from the overall goal of safe and efficient patient care. 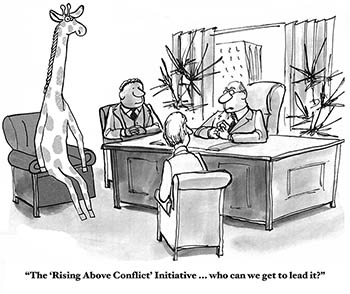 Surveys of hospital staffers indicate that they often perceive doctors as a main source of conflicts. Physicians often have forceful personalities and little training in interpersonal skills.

Nurses and technicians expect and deserve to be treated with respect. A disruptive physician increases stress and decreases efficiency in the work environment. Morale and team spirit suffer, which can quickly result in a dysfunctional team, communication is poor and staff members withhold information because of fear of generating conflict. Any information withheld may be vital. The physician loses staff support and may become isolated. In extreme cases, staff may fail to properly assist, file lawsuits, support the plaintiff in a malpractice suit against the physician, or even sabotage the practice.

If a physician is disruptive, intervention is essential and courts could see lack of action as condoning a hostile work environment.

When a confrontation becomes necessary, a team approach is best. Ideally a member of the team will be a close acquaintance of the physician so he or she feels less threatened. If only one person is involved, the physician may view the intervention as a personal confrontation. The team should document specific incidents and focus on behavior, not personality. The team should show empathy but demand change and specify consequences. The communication should be direct and clear, and the physician should be given a chance to respond at the end of the complaints, but not before. The goal is to correct the situation and allow the physician to perform at his or her best, so the team should look for the good in any situation and build on that.