Report by Canadian Centre for Diversity and Inclusion. Read full report here:  CCDI Report: In & Out: Diverging Perspectives on LGBT Inclusion in the Workplace 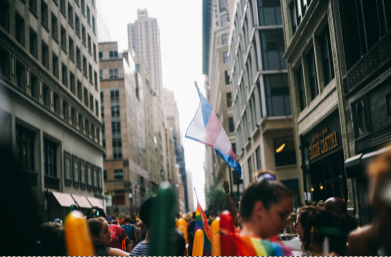 someone has a photograph of a significant other on their desk, when someone wears a wedding ring on their finger, and when someone talks about their family or what they did on the weekend with a partner. Conversely, gender identity is often not talked about in the workplace at all, not because people believe gender does not exist in workplaces, but because many people have no sense about what gender identity means. But discrimination in workplaces against individuals who do not identify as a cisgender man or woman is common.

Here are some issues several that were identified [by the Canadian Centre for Diversity and Inclusion] as areas that require greater attention or improvement within the Canadian work context:

Most who identify as heterosexual or cisgender are already inadvertently “out” with their identity, likely without even knowing it. They may wear a wedding ring, have a photo of their significant other on their desk, talk openly about their spouse, or display other indications of their heterosexuality and cisgender identity. Because heterosexuality and cisgender identity are normalized in our society, for many in these dominant identity groups, it would never occur to them to hide their sexual orientation or gender identity or even have to consider whether to disclose.  For those who are LGBTQIA2S+ identified, whether to disclose at work can be a daunting consideration. A consideration for employers: while there is no definitive research on exactly how many LGBT+ people there are in Canada, let alone in the world, if you have a significant number of employees and no one is “out” at work, employers should ask themselves what about the culture or environment of their workplace is deterring people from disclosing their sexual orientation or gender identity. A few things to consider:

Identity is a complex topic for individuals, particularly when the identities we are talking about have been marginalized from inclusion in our education systems and public dialogues, as has been the case with LGBTQIA2S+ individuals. Some people in our workplaces may have never had a discussion about sexual orientation or gender identity or even knowingly interacted with someone who identifies as LGBTQIA2S+. Because people may be unfamiliar with these issues, their first encounter might be uncomfortable and might not be handled well. When these experiences occur, they can create confusion, exclusion, or even hostility. That is why it is so important that employees be educated about sexual orientation and gender identity in the workplace. Education can be as simple as sharing the definitions of different sexual orientations and gender identities (as seen earlier in this report) with your workplace to help them understand the variances that exist beyond their own personal experiences.

When we address fear of discrimination, we need to realize that LGBTQIA2S+ individuals have historically been the victims of systemic and interpersonal discrimination and violence, and much of that discrimination persists today in all areas of one’s life. Focusing solely on workplace experiences, despite human rights protections, individuals have been fired for being LGBTQIA2S+ identified (or even for being perceived to be LGBTQIA2S+). They have been passed over for promotions, mentoring opportunities, and certain work tasks. LGBTQIA2S+ employees have received lesser pay for their work, experienced harassment and violence in the workplace, and social rejection and isolation. These situations continue to occur around the world and across Canada.

Existing in a world where such forms of discrimination occur, there is little wonder why LGBTQIA2S+ individuals may continue to fear identity-based discrimination. Not knowing how someone will respond to the disclosure of an LGBTQIA2S+ identity can lead to anxiety and stress.

Individuals who are part of dominant identity groups are overall less aware of the systemic discrimination faced by sexual and gender minorities. They often do not see that their identities are normalized, and frequently being enacted even without the labels of heterosexual or cisgender being stated. Thus, they are “out” without even being aware of it. When a cisgender female needs to use a washroom and does not consider that the gender identity, she presents to others in the office makes it easier to use a gendered washroom, she is ignoring cisgender privilege. Every time a heterosexual male mentions his “wife” at work he is broadcasting his heterosexuality.

When heterosexism and cis-centrism are reinforced, and the privilege of these identities is not acknowledged, it makes it potentially harder for LGBTQIA2S+ individuals to feel safe to disclose or enact their identities.

The lack of education around gender identity issues in the workplace is concerning as these forms of ignorance further perpetuate forms of exclusion or discrimination against people with a minority gender identity. These forms of exclusion might include, but are not limited to, an inability for someone to present as the gender they identify with, or an employer being unwilling to offer individuals the opportunity to use their preferred pronoun or preferred name on documentation or during interactions.

It is important for organizations to educate their workforce around the complexity of gender identity for the sake of understanding and inclusion. Not to do so is to allow ignorance and exclusion to fester. The quote to the left captures the unique experiences for individuals with a minority gender identity perfectly.